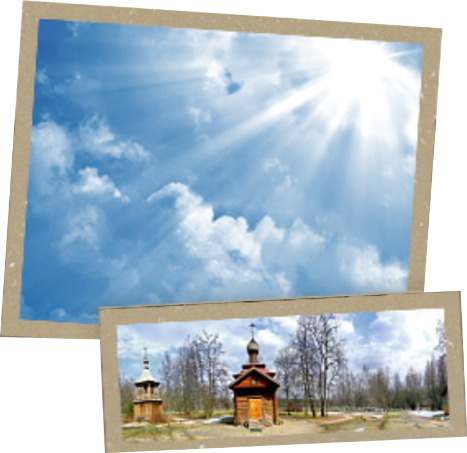 Let me greet all of you, dear fathers, brothers and sisters, on this Lord’s day, which is also the feast day of the Holy New Martyrs and Confessors of our Church.

Today during the Liturgy we heard the remarkable words from the Second Epistle of Apostle Paul to Corinthians: “And what agreement hath the temple of God with idols? for ye are the temple of the living God; as God hath said, I will dwell in them, and walk in them; and I will be their God, and they shall be my people” ( 2 Cor. 6:16).

When we think of the New Martyrs and Confessors, this text can help us understand the meaning of their feat better. What agreement has the temple of God with idols? For you are the temple of God. The Apostle says these words to Christians of Corinth and, through them, to all of us. Each man is created as a temple of God, for the man was made by God in His image, after His likeness (Gen. 1:26). In his immortal soul the man carries an image of the Divine life, an image of eternity. He is the apex of creation, and if the man follows the Divine law, believes in God and acknowledges God as the highest value, he becomes freely and consciously a vessel of God.

And what are idols? Idols are also a value for some people who create them or worship idols made by others. An idol is always a creation, sometimes even God’s creation, like natural phenomena: thunder, lightning, storms, the sky and the earth that were worshipped in the old times as absolute values, with nothing above or beyond them. But what started as the worship of nature, God’s creation, even though it is not worthy of divine worship, continued with creation of other idols, made not by God, but by men, and, most abhorrently, with the worship of the man himself.

We know all too well these words: “The man is the highest value”. And if he is the highest value, with nothing above him, why should not he be worshipped? Whole philosophies were developed to teach people to worship the man. Individuals, like heroes and rulers, were selected and deified. We also know such a thing as a personality cult. But this too is an idol produced by the human imagination, by a bad phantasy. There are numberless other examples: philosophies, ideologies, policies, individuals can all be turned into false gods. The human nature as such, that so easily falls prey to passions, vices, temptations and sins, is deified in its present condition with the very same sins and vices inside. And hence comes the worship of these sins, the idolatry.

And what can the martyrs and confessors teach us here? They too were forced to worship idols, in their case political and philosophical ones. They were told to either find agreement between the temple of God and idols or, in the worst case, to sacrifice temples of God to these idols. But they did not give in.

When we look at their feat now, we admire their courage. But this is not enough. We must picture the atmosphere, in which these courageous men and women went against the current. Idols of their age promised happiness for all men, just like in the antiquity idols were believed to bring welfare, fertility, wealth, bodily pleasures and power. Similarly, the new intellectual idols promised joy, welfare, justice, God’s kingdom on Earth, only without God. And there were so many people who chose to worship those idols and renounce God. For these words are true: “There is no agreement between idols and the temple of God”. If you worship an idol, you can’t worship God who is present in His temple.

And so what happened came to happen. In their worship of ideological and political gods people treated them as the highest value and served them religiously, sacrificing their own lives. Not only were they prepared to give up their own comfort and lives of other people – they were ready to, and did, put their own lives on the altar of these idols.

We know with how much blood our nation paid for this idolatry. There was so much blood spilt that one would think that we should have a strong immunity against all kinds of false gods, we should be so focused on the worship of God, on the understanding that there is no agreement between His temple and idols, that no other temptations could divert us. And yet this is not the case: new generations who never came in touch with the tragic experience of idolatry and its bloody sacrifices today give all their strength, vigour and youth to new cults, new so-called higher and absolute values that arise out of the man’s sinful nature. These new idols are wealth, consumption, power, money and pleasure. These false gods that are now proclaimed as true and almighty are given altars, and sacrifices are made to them, that, thanks God, are not yet bloody. But so many lives and destinies have already been ruined by them! By serving these idols, so many people have destroyed themselves, have lost their chastity, purity, their righteousness and inner integrity, their holiness indeed. So many have left their families, so many children have become orphans, even though their parents are alive. So many people break the law only to continue their endless quest for pleasures. Crimes, corruption and all that we usually name as the main vices of our society are all consequences of idolatry.

Of course, the Holy New Martyrs and Confessors faced a much harder choice than we do. Today nobody threatens with death, torture, jail or exile for refusal to worship idols. But it is exactly this that is the tragedy: that people choose to worship idols freely, without any coercion and even enjoy themselves while doing so.

What can save us from these delusions? A strong faith and memory of our martyrs and confessors who did not worship idols even in the face of death. They passed away to God and became heroes of our people and saints of our Church. And when we glorify them today and remember all these people whose names are only known to God, we ask them to stay with us in this difficult time of new idols and misleading ideas.

The Gospel tells us that if Christ had not come, we would not have sin. But now that we know what He did and said, we have no cloke for our sin if we do not fulfill the law (compare John 15:22). We can apply these words to our today’s subject as well.

If we did not have the example of the New Martyrs and Confessors, it would be much easier for us, like in many other countries where the denial of God and idolatry have slowly developed across generations. There, the break with the faith and the Christian tradition is often seen as a natural development of the philosophical thought. These countries did not suffer such a frightful punishment for idolatry. But our nation has been taught this lesson and has an example of the great Holy New Martyrs and Confessors. And that is why we must have the strength to fight the temptations of idolatry.

As a nation, we must have spiritual strength – we do not have a right not to, not in the face of the sacrifices of our fathers and grandfathers. We must keep the faith and acknowledge only God as the highest value, we must worship Him alone and not the temptations of this world, be they intellectual or physical.

We believe that the Holy New Martyrs are with us today, praying for their people. And through the power of their prayer we are granted the ability to resist false gods and remember that we, Christians, are temples of God and God is with us. He walks with us, He has called Himself our God and us – His people. Amen.

Press-office of the Patriarch of Moscow and All Russia